This site is dedicated to the memory of Sergeant Michael Kennedy, Constable Thomas Lonigan and
Constable Michael Scanlan of Victoria Police who were brutally murdered by Edward (Ned) Kelly, Daniel (Dan) Kelly, Joseph Byrne and Stephen Hart, at Stringybark Creek, north of Mansfield, Victoria, on the 26th October 1878.

THEY WILL NOT BE FORGOTTEN. 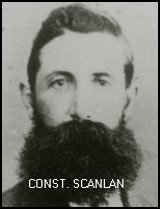 Ned Kelly was a prolific liar. Sadly, many sympathetic authors have accepted his lies as being fact, when the most simple examination of historical and reliable documentation is ignored. This has led to a great deal of information, books and other printed material being tainted with Kelly's lies.

We present factual information that has been thoroughly researched and can be proven by authentic historical records.

We are desirous of ensuring facts relating to the Kelly outbreak are promulgated by government agencies across Australia. We will move to have false information removed that presently dominates government publications and replaced with authentic facts.

The site will be continually added to with additions being thoroughly tested to reflect accurate information that has been authenticated by historical records that are confirmed as factual.